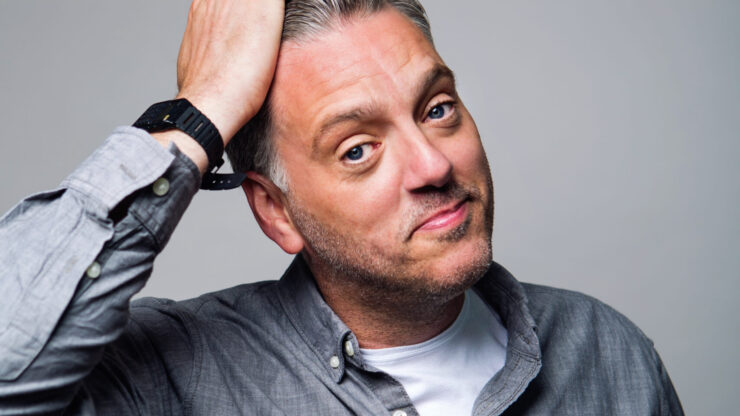 It’s a good idea to know what you don’t like just as much as what you do. Who do you NOT want to sound like? When I first sat in front of a microphone, my heroes were Chris Morris, Danny Baker and even Chris Evans (trust me, the man was/is/was a genius and gave the airwaves a right royal kick up the bum bum just when it was dying on its, well, bum bum). Yet it took bloody ages to STOP SOUNDING LIKE A DJ. There is something about having that foam covered amplification stick that brings out the Blackburn, the Brookes or the DLT in us. OK, maybe not the DLT, but you get my point.

The nicest man in the world. Every office should have one.

Hey, if you want to sound like those guys, that is fine. Blackburn has been working on radio for over 300 years, is the nicest man in the world and totally created and owned his own style. But why would you want to sound like him? He’s already there doing that better than anyone. (I would definitely suggest staying away from a bit of ‘quack, quack oops’. That’s probably never going to make a comeback). But I’m hoping that because you’re reading this blog you want to do something a little different, be as unique as possible while still getting an audience. And maybe paying the bills. That isn’t everyone’s prime concern, and if it isn’t yours, brilliant. You can do what the hell you like then. But if you’ve got kids and a mortgage and no other discernible talents, then I’m afraid compromise is almost inevitable.

Go and listen to loads of radio. You’d be surprised how many people who want to work in radio don’t really pay it much attention. That’s nuts! Imagine wanting to be a mechanic, it’s your life’s ambition, and yet you’ve only ever heard one radio broadcaster. No, hang on. That doesn’t work. Right, er, OK, yeah, So you want to be a baker but you’ve only ever eaten beef. How do you know what’s a good loaf and what’s a bad croissant? You simply don’t.

Same with radio. Sort of. Listen and listen and listen. To EVERYTHING! You want to be a DJ*? Listen to as much speech radio as you can. Fancy being the new James O’Brien? Well make sure you listen to Radio 1 and Kiss and Heart. Don’t listen to too much Heart, I would hate for you to be put off the industry completely by its soulless robotic output, but go and hear what other people do. There will be loads of little tricks you might pick up and definitely bad habits you will want to steer clear of.

The point is, too many people think that radio is one thing or another. They believe it belongs in very strict boxes. That’s balls as far as I’m concerned. When I used to present on the speech station LBC, I wouldn’t think twice about sneaking the odd song in every now and then. Mix it up. It’s so hard to be surprising these days, we are all so media savvy, we’ve seen and heard it all before. But, but, but, there are still things you can do to keep people on their toes.

I have to stress, when I say listen to people and pick up what you can, do be careful. Don’t just lift material directly. Being completely honest, I’ve done it once or twice in the past. I still do it occasionally, even now, but I always give credit. ‘Hey, I was listening to Eddie Maier on Radio 4 last night and he came out with a great line…what do you think about this?’ In my humble, that is fine. Not everyone will agree. Some bosses hate you mentioning other stations because they don’t want listeners to go ‘there are other outlets that I could be listening to?? WTF! Why did no one tell me?????’ But come on, let’s be real. There are shed loads of stations and I don’t always listen to just the one I work for.

Anyway, back to idea thievery. There are some very big names out there working in the industry that nick other people’s material without a second thought. I am of course referring to ***** *****. This shifty dodgepot famously takes ideas from American radio as well as from people in the UK and pretends it’s his own. Very naughty, but he’s a big star, so what are you going to do? Absolutely nowt. Except maybe make little digs on air and have a vague pop at him in this blog, but staying well within the boundaries of what is legal.

There is a chance you may actually get away with it. That no one will recognise your pilfered lines. But come on guys and gals (probably can’t say that anymore), it really isn’t fair. I know the entertainment industry is pretty shitty and backstabby, but let’s not shaft other presenters. Let’s save our shaftiness for when we’re screwing over our bosses.**

I’ve never denied my influences and early on, when I didn’t really know who or what I was and had no idea what my ‘voice’ was, I certainly leant perhaps a little too heavily on the styles of others. Boyd, Baker and Bull were masters in my eyes and I supped freely on their hosepipes of output. But even in those early days, I like to think I was twisting it enough to not be accused of plagiarism, that I was throwing just enough of my identity in there to make it kind of my own.

How do you talk to your mates over lunch? It’s unlikely you’ll be able to employ exactly the same technique on the wireless, swearing doesn’t go down too well over the airwaves, but do consider it how you speak in that environment. How would you tell them a story? What do you say to drag them in, keep them on the edge of their seats and make sure they don’t get up and go for a wee before you’ve finished.

You’d kill your mate if he turned up at the pub with a list of ‘topics’. Although point 9 actually looks good.

I like to approach my shows like a night out with friends. No one turns up with a bit of paper and says ‘hey guys, I thought for the first hour we could talk about Iraq and then at 10 we are going to stop talking about that and move on to Ed Milliband and we can finish up comparing rare records and see if we have anything in our collections worth a few quid’.

Life isn’t like that. Conversations have to be organic. Sure, you probably need to start with a point, an idea, something to talk about (I am desperately trying to avoid the word topic. I hate it when presenters announce their ‘topics’ for the show. Fuck off) But I try not to stick rigidly to those things. Why ask just one question? Fire out a few. And embrace tangents. If someone goes off on one, try and go with it. It may take you absolutely nowhere but it might just give you that gold, that edge that makes your show unique. A good presenter (and indeed producer) will know when to go off into the clouds with a listener or when to reign them in. And you won’t always get it right, but it will make you seem that little bit dangerous to the listener.

**I have never screwed over any of my bosses. Ever.

What I Mean When I (Don’t) Say I’m Depressed.