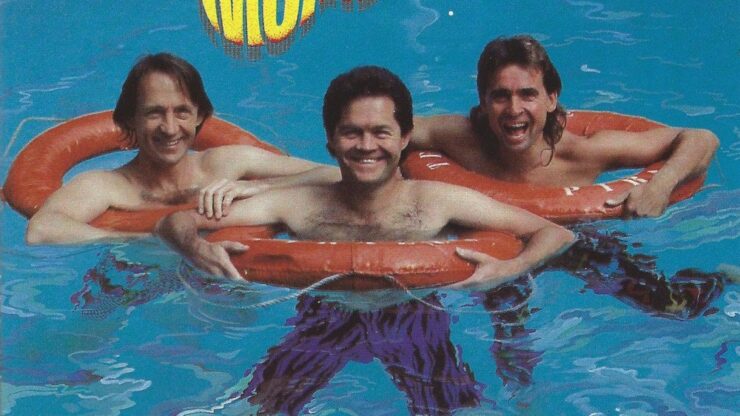 I absolutely love The Monkees. My first records were a scratched copy of I’m A Believer and a beaten up old copy of the first album, sans cover. This must have been around 1976 when I was 3 years old. I loved them. I constantly tried to record the B Side to Believer, Stepping Stone, on my old Dansette by dangling a microphone inside and hitting record and play on my tape recorder. It never occurred to me to have the microphone outside the wooden box, you know, by THE SPEAKER!

Micky, Davy, Peter and Michael have always been my companions. They’ve been with me every step of the way (a joke there for fans of their mid 80’s career). I loved the TV show, had my mind blown by the movie Head and have spent pretty much all of my life banging on about just how good they were. The fact that they didn’t play their own instruments on their first or indeed last few records is no longer relevant. We all know the Beach Boys didn’t play on Pet Sounds now, so a lot of the musical snobbery has gone.

And these guys created some of the best pop ever. How could they not? It was written by Neil Diamond and Carole King, played on by Glen Campbell, Neil Young and the band retrospectively called ‘The Wrecking Crew’. Daydream is THE perfect pop song – lush, catchy, sentimental and just the right length. Pleasant Valley Sunday is a cynical psychedelic barrage of angst disguised in a sugar cube, and the aforementioned Stepping Stone is pure pro to-punk.

Not much. Changes, the last album of the initial Monkees run, features just Davy Jones and Micky Dolenz and is a tired rag bag of songs that other artists wouldn’t touch. A lot of fans hate it. That’s a shame. I love it’s world weariness. Ferry Ride is just achingly beautiful and Oh My My is pure sexual filth. The 1987 album Pool It! may have the worst title of all time and a hideous cover, but listen to Dolenz belting out Midnight? Jesus, it’s just incredible. And Since You Went Away submitted by Tork is hilarious and triumphant in one fell swoop.

So, here for your aural displeasure are the 5, count em, worst Monkees songs of all time.

Kicking off with what some may consider, from the 1987 reunion album Pool It!, I give you the absolutely piss poor She’s Movin’ In With Rico. Pool It! SHOULD have been huge. The Monkees were riding high on the back of their 1986 reunion tour. It was one of the biggest grossing tours of all time and catapulted them back into superstardom after years in the wilderness. They’d already had a top 20 hit of sorts with That Was Then, This Is Now, not technically a Monkees song as Davy had a strop and refused to sing on it. And it was another hissy fit from The Manchester Cowboy that through this album of track, or at least one of the reasons.

Basically, the 3 guys (Nesmith was too busy to rejoin, he wasn’t being snobbish as some have said) were having a love affair with MTV (created in part by Nez trivia fans). The new music channel had helped kickstart the reunion by showing all the eps of the TV series back to back. Both sides won. Then The Monkees were booked to appear at some MTV do, Davy didn’t fancy it and buggered off. Without telling MTV. Boom. The boys were banned from the channel and any promotion they may have got was out the window.

That’s all well and good, but even MTV getting behind the album wouldn’t have helped this song. What is it? Is it a joke? The Monkees doing cod reggae? What the…? It is a mind numbingly bad choice of song for this group to cut and one can only wonder how strong the Frodis was in the 80’s if anyone thought this was a good idea.

Michael Nesmith. What a guy. I was lucky enough to interview him once. A genius. Seriously, His mum invented Tippex (OK, she was a genius) he invented MTV, the music video and country rock. Listen To the Band has got to be one of the best songs of all time. His voice, ah man, it is just so sweet. Rio! Papa Gene’s Blues. Yes please. Hell, I even paid $100 to meet him for 90 seconds and get him to sign my Head box set (just his name, mine would have cost an extra $40 – fact) and do you know what, I can’t hate him for any of those things.

I can hate him for Writing Wrongs. It’s from The Birds, The Bees and The Monkees – an interesting album that kind of signified the beginning of the end of The Monkees as a pure pop act. Sure it’s got Daydream Believer and Valleri on, but it also has some far out experimentation. A lot of which works. Auntie’s Municipal Court is a joy and Magnolia Simms (both from The Nez) is wonderful.

It clocks in at 5.08, not in itself a crime, but the majority of it is filled with a laborious keyboard solo that turgidly drags along and makes you want to eat your own fingers. I couldn’t give a stuff about Bill Chambers, or his mum, and the drawn out, painful vocals leave me wanting less. Awful.

This is from the second album, More Of The Monkees, a record the boys didn’t even know existed until they went into a record store and saw it in the racks. The cover is an embarrassment, a picture taken from an advertisement for what can only be described as fugly clothes. It’s a real mixture of songs from different writers and producers. There is no coherent sound, and while it sold over 5 million copies, it’s not one of my favourites. The obvious choice from that LP for this list would be The Day We Fall In Love. Yes, the spoken word ‘song’ may be a bit schmaltzy, but fuck it, Davy can do schmaltz. And if you have the stereo version, ditch the vocals and listen to the music, it’s actually quite charming.

No, Laugh is terrible. Davy’s vocals, for me, tread a fine line between wonderfully powerful pop voice to annoying and nasally broadway. Ah man, I just pissed off a load of Davy fans. Sorry! I love him. I cried when he died, but he could be a bit grating sometimes.

Anyway, I think this song is meant to be a joke and a comment on the social scene in the sixties. ‘Laugh, when you go to a party, and you can’t tell the boys from the girls’. Right, OK mate. Yeah, that’s exactly what I’ll do.

Oh, bloody hell. In for a penny, in for a pound.

This should be a great song. Written by Carole King and Gerry Goffin at the height of their powers. A song about star fuckers. One of the first songs to ever feature the Moog (pronounced Mow-g) synthesiser. But…it doesn’t really work.

Again, another example of Davy trying to do Anthony Newley, instead of doing Davy Jones (honestly, I love him. Go and dig out the lost classic It’s Nice To Be With You. Delightful). And yes, Dolenz is playing the third ever Moog, but, let’s be honest, he aint got a clue what he’s doing! That cat is as high as a kite. And while his frazzled brain may be getting off on all the crazy sound effects, it just annoys the hell out of me.

I think I should maybe mention that the first time I heard this song was when I was 14. It was still pretty hard to get Monkees stuff then and I didn’t have Pisces, Aquarius, Capricorn and Jones Ltd., the majestic album this track comes from. My friend Psycho Bob T had a weird compilation that had this song on. He lent it to me and because I was so excited to have a Monkees song I’d never heard before, I recorded it 12 times in a row to make it easier to listen to. I may have made myself hate this song.

This is terrible. Poor Peter. A wonderful musician, an earnest guy. He would keep turning up at Monkees sessions hoping to get a crack at a song. Boyce and Hart, the main songwriters and producers would let him have a go, and then get another Monkee to record the song once he’d gone. This, from the second LP, was Tork’s big break. A chance to sing lead vocals. And…well…neither the song or Tork were up to the job.

I read somewhere this commentary on a nasty aunt was meant to sound like 19th Nervous Breakdown by The Rolling Stones. It doesn’t. It sounds shit. And the amazing thing is, they keep playing this bloody song on tour. Every tour since 1986, they’ve wheeled this one out as Peter’s solo spot. Let me tell you something guys, no one likes it. This is the toilet or bar break tune. Let Peter do Lady’s Baby, Come On In…there aren’t many tunes he did but they are all better than this monstrosity.

OK. That’s my list. I’m expecting some hate and I’m sure I’ll get shunned by some of the fans (Monkees fans are ze craziest people) but please remember, I love The Monkees. It was as struggle to come up with this list. And boy, it was cathartic.

My names Iain, and I’m a Monkeeholic.

2
How To Do Radio / Katherine Boyle

8 – What’s Your Poison? by Katherine Boyle