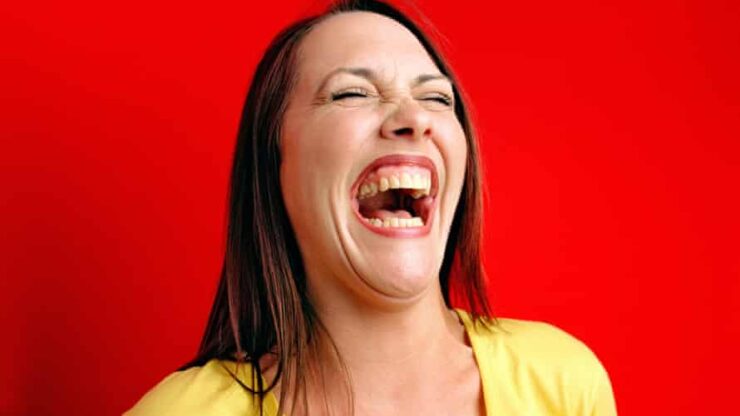 One of the reasons Iain gets the calls he does is that he spends weeks, months, years, tickling them…not literally…it’s a strictly non-contact sport these days.

Let me put it another way…

…when you meet someone new, best not to initiate the relationship with “Have you ever been raped?” or “What do you think about Islamic State?” You’ve got to build up to questions like that.

Making the listeners laugh is not only a huge buzz for the presenter, it keeps them coming back for more. You’ll get them to stick around long enough to work out that there’s more to the host than being ruddy hilarious. They’ll learn to trust him/ her. They might even call.

Katherine Boyle has a posh laugh.

I can’t tell you how to brew funny, but I think it lies somewhere around being unguarded and honest. The presenter needs to relax, let go and allow themselves to open up. That doesn’t mean being a stand-up. Just be friendly, open and not too hung up about sounding ‘official’. The element of fun is something you can’t force, train or plan – in fact excessive planning can squeeze it out of a show – but give the right presenter the right team and space to breathe and you can guarantee a decent giggle rate.

So if you have a funny presenter, please give them a chance to show it.

I know, this is supposed to be work and it could be that you have a show crammed full of serious topics, but believe me, make time for a laugh and you’ll notice a real difference in the quality and quantity of listener interaction.

One example of this is Iain’s relationship with one of our callers, Matt. When Matt started ringing up, it was always for a moan. Nothing we said made sense, the music was crap, he was going to go back to Chris Evans. Then Iain made him laugh…I think by offering him a fight in the car park.

Over the weeks that followed Matt rang up for a playful row every few days. He started out grumpy and left us laughing. Hearing that relationship develop was great and the messages we got suggested the audience enjoyed his calls as much as we did. Anyway, one day there was a story about dementia that made Matt forget his Chris Evans threats and tell us more about his life. Turns out he’d been caring for his wife Margaret for years and, recently she’d taken a turn for the worse. She was now in a nursing home and he was desperately worried and feeling really lonely without her.

The calls and offers of punches in the face continued, but so did the insights into Matt’s life. Iain would ask after Margaret, make sure Matt was looking after himself and then the ribbing would resume. One day Matt told us he’d been entertaining his wife and the other care home residents by singing Johnny Cash and Kenny Rogers songs; “Jeez Matt, haven’t the poor souls suffered enough?”

Sadly Margaret’s condition got worse. When she died this time last year we were genuinely sad, and so were a great many listeners. Matt called to tell us the morning after, because in his words, ‘we’d become friends.’ Five minutes later, his daughter called to say that her dad’s calls to the station had been the only way she’d been able to hear how he’d been feeling. He’s an old-fashioned bloke, you see, doesn’t talk about emotions.

My God! That family had been genuinely touched by four divvies on a local radio station!

So what can you take from this?

If anything, it’s remembering that your listeners are only with you for a short time, then they go back to their lives. And while we’d all like to believe we’re keeping happy people company while they walk their waggy-tailed dog, or dish up delicious meals for two point four apple-cheeked cherubs who’ll no doubt grow up to be rocket scientists who make time in between launches to call their dear old mum, chances are they’re dealing with the same crap, if not worse crap, that we are.

They don’t tune in to be reminded of it. They want to be taken out of themselves, just for a few minutes, and you have the power to do that. Not with pun-based phone-ins or knock-knock jokes (although I’d never rule those out), but with real warmth and humour from a team that surprises itself as well as the listener.

That’s the power that comes with this job. You’re reaching out to people every single day and you may never know who you’re helping, but you are helping.