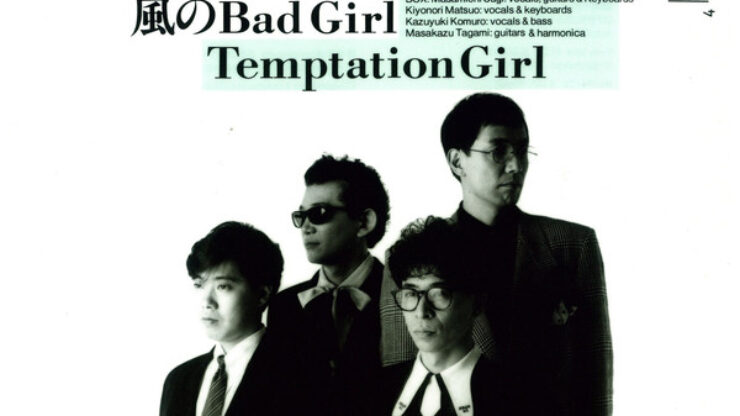 I’ve mentioned before how I stumbled across the superb Box, a Japanese group of Beatles fanboys. They were a wonderful group that shone brightly over their 2 albums (Box Pops and Journey To Your Heart) then vanished. Temptation Girl from the first album is one of the all time great Beatles songs the Fab Four never got round to writing. Don’t believe me? Check this out.

Anyway, their last album was something like 22 years ago. They all went off to form excellent spin off projects (including the wonderful Piccadilly Circus which strangely sounds like Wings and 80’s era McCartney!). I loved a lot of these groups, but I was hankering for the impossible – a NEW Box album.

A while ago, a Box insider and friend of mine Saeko Ichimi told me there were rumours of a reunion but I couldn’t tell a soul. Secretive emails or FB messages would appear every so often with little updates. And then, suddenly I find a lovely little package at home waiting for me. The third Box album – Mighty Rose. To make the event even more special, they gave me a thank you in the credits! Me? That fella from UK radio getting a mention on the album sleeve of one of my all time favourite bands? Incredible. At least, I hope it’s a thank you. It’s surrounded by Japanese writing so to be honest, they could be saying anything….

There is always a sense of apprehension when a favourite band reform to record a new record. History has shown us that more often than not, that record is a stinker. I was a tad worried but any fears I had vanished as soon as the opening riff to Tokyo Woman kicked in. A dirty, simple piano starts, overlayed with an even dirtier leading in to Temptation Girl for 2012. Within minutes I was singing along as best as I could to the 5 English words I could decipher in the chorus. The rest I sort of made up.

Songwriters and frontmen Masamichi Sugi and Kiyonori Matsuo proudly display their influences on their sleeves and the album veers between Beatles, Beach Boys, The Move, Dukes of Stratosphear and even a bit of Queen. The thing is, these guys, including bassist Kazuyuki Komuro and guitarist Masakazu Tagami, are so good at it, that you don’t begrudge the nod to other bands. They obviously get so much joy from playing these songs that it becomes infectious. It sounds like an English album (I hope they take that as the twisted compliment it’s meant to be) but sung primarily in Japanese.

Stand out tracks include Tagami’s ‘Dance With Alligator’ (a really messed up Wings style song), ‘Sunny Side Of The Moon’ (If I Fell, crossed with a bit of early Elvis guitar), the title track Mighty Rose and the ‘should be a top ten hit but the world doesn’t work like that I’m afraid’ song that is Tokyo Woman.

I’m so happy this record exists. You should be too. As always, you ain’t gonna find it in Our Price, so order it from here.

I salute you Box, I really do. Thank you for getting back together. Now come and do some gigs in the UK? OK?

I Made A Live CD!

Iain Lee & Katherine Boyle present – How To Do Radio