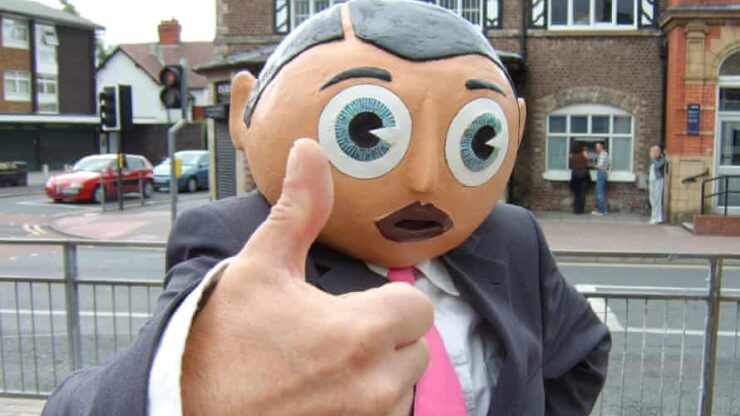 Frank Sidebottom wasn’t everyone’s cup of tea. But even those who ‘didn’t get him’ have been moved by his passing on Monday 21st June 2010.

Frank was a huge part of my life. Huge. I was introduced to him when I was 14 years old by my friend Malcolm Richmond. He played me one of his Christmas e.p.’s and I was hooked. Here was this weird guy, with a huge head, who sang bad pastiches of songs played on a crappy Casio, whilst arguing with his ventriloquist puppet. When you put it like that, it doesn’t sound like much of an act. But Frank made it work.

He was created to promote the ZX Spectrum game, The Biz, where you are in a struggling band, trying to make it in showbiz. It’s a fun little game, complete with spelling mistakes and bugs. Frank was also the soundtrack to my gaming days. It was either him or The Monkees on in the background as I struggled to get anywhere in Twin Kingdom Valley.

My first ever gig was seeing Frank hosting a show at, what was then, London Central Poly. Also on the bill were underrated indie band The Man From Del Monte, Buzzcock Pete Shelley and Ed Tudor- Pole. Some line up for a 16 year old. But it was Frank who stole the show. He was just the most mental act I had ever seen.

I followed Frank for years and then he just kind of drifted out of my consciousness as things that you like as a kid often do. I didn’t grow out of him, I just moved on. Until 5 years ago when I started playing some of his stuff to my wife. I realised that what he was doing was not childish nonsense, this guy was actually a genius. It was brilliant on so many levels.

I was presenting a radio show on LBC and hunted high and low for Frank to get him as a guest. To cut a long story short, we found him and he came in one day. He sat in my studio for an hour, big head on, just messing around and being hilarious. I was 14 years old again and couldn’t breathe for laughing. At the end of the show, Frank looked at me with those big eyes and said in that nasally voice ‘You’re going to hate me now’ as he slowly lifted his head off. I was horrified. I didn’t want to see what was under there.

But I’m glad I did. Because that was the day I became friends with Chris Sievey. The faceless genius behind my childhood hero. The man who had for years, allowed Frank to take the spotlight, never once ruining the magic by letting his own ego to take over.

Over the next 5 years I did several gigs with Frank, interviewed him a few times and was even owned by him on his TV show (YouTube it, it’s hilarious). I am proud to say Chris was a friend and I’m in tears now as I write this. His death is a great sadness and has hit me harder than I ever thought possible.

0
How To Do Radio / Katherine Boyle