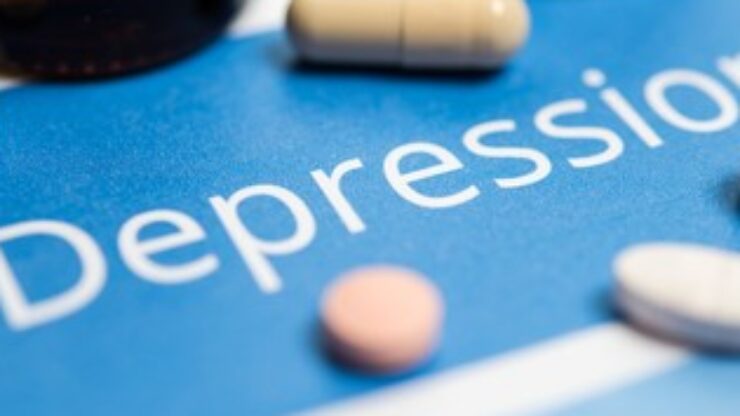 I’ve been on anti depressants for years. Citalopram worked for a long time. And then it didn’t. I tried a few others and finally, with my Harley Street psych, came up with the winning formula of Mirtazapine and Venlafaxine. The Mirtazpine was ace. It would make me sleep for up to 12 hours at night and gave me the weirdest anxiety dreams ever – being chased, moving home, packing, exams – I loved it. Thing about the big M was it made me FAT. I put on maybe 2 stone. I was going through a tough time including a marriage breaking down and my ever present depression and anxiety issues and it was just the little hand hold I needed at the time. Oh yeah, I had difficulty expelling liquids from my body – I couldn’t cry or cum.

Things started to move and change and I became profoundly unhappy with the excess weight I had piled on. Talking to my doc, we got me off the Mirtazapine. That was pretty straight forward. I just stopped it (under his supervision) and lost some weight. then I put it back on. Oh well. I didn’t sleep as well and the dreams went but I was actually OK.

It’s been my ambition to come off the Venlafaxine (Effexor) for a long time. I never wanted to be on anti-d’s for my whole life, that wasn’t the plan. I asked my psych again and again and he suggested that while I was living in a bedsit and waiting for a divorce, perhaps I should wait. I finally moved out of the bedsit and the divorce is all but done so when I approached my doctor 2 weeks ago today, he reluctantly agreed that perhaps now we could start weaning me off the might V. He wanted to wait until next year but could see I was keen and we both agreed if things go too bad I’d hop straight back on it.

I was on 150mg of Venlafaxine for a few years. I knew one of the main side effects would be the electric shocks in the brain. If I missed a tablet one day or was even a few hours late taking it, my brain would buzz and fizz and pop with electric shocks. A horrible, exhausting thing that would totally knock me for six. Horrendous fucking things. I’d also had the trails before, kind of a throw back to LSD, where if I turned my head quickly, the light would follow and create lines that would hang in the air for a second before slowly vanishing. Trippy man, but not really the fun trippy.

I knew those things were coming but fuck me man, I was totally unprepared for everything else. The dosage is being reduced in stages and I immediately dropped from 150mg to 75mg. That was 13 days ago. This is actually a pretty big jump and I was surprised when my doc suggested that. Halve it for a month, if that is OK, then 4 weeks later cut it out completely. OK. I had to admit I was excited and terrified in equal measure. This was what I wanted. To see if I could live drug free. I’d tried before and not really been able to handle the weight of being, but I really believe my life is heading somewhere calmer and I just HAD to find out.

The first thing that hit me, apart from the shocks, was the physicality of withdrawal. Nausea. Sweet Jesus. I felt so so sick. I wanted to throw up. I burped a LOT (I can’t normally burp, I’ve done maybe 20 in my 45 years and yearI’ve done about 50 in the last 13 days). that churning stomach. My shit takes on no form I recognise, it looks like chocolate mousse. The headaches. Blinding. My eyes felt like they wanted to bleed as someone turned a screw behind both of them, a screw too deep inside my head for a simple temple massage to help. Tightness of the neck. My legs ache so so much. I feel 86. Getting out of a chair became a huge chore. Today, 13 days in, this has all lessened significantly although I did wake up with an awful head. I get the nausea for about an hour a day. Around 12.30 it kicks in, with awful sweats, but passes eventually.

i was not prepared for the emotional rollercoaster, which seems pretty much to be on a downward with only a few upturns. I hate myself. I am a worthless piece of shit. I fucking deserve to be miserable. What the fuck have I done of any worth? Everyone is better than me. Quit your job, you don’t deserve it, you’re a fucking chancer that got lucky. Yes you’ve been continually employed for 20 years, you’ve won awards in the last couple of years and you have a loyal listenership BUT you are a cunt and a horrible man and a failure as a husband and a dad and you should just shut the fuck up and die.

What? Where did all that come from? And yet those are thoughts I am getting alone or in various combinations. Frightening, loud, echoing around in my worthless head. I hate myself as a parent, feel I am letting them down as a dad and setting a terrible example.

And pause. For a second. I am well enough in terms of mental health and in terms of drug recovery to suspect that most of what I just typed is rubbish. Maybe. Perhaps it’s real. I’, struggling to know what is and isn’t fact. But I THINK a lot of what I just typed isn’t accurate. I dunno. Now I’m thinking about it, are they true. I am a failure as a husband. I did get lucky.

SHUT THE FUCK UP.

I’m so tired. I want to sleep. But there’s just too much to do. And the loneliness, THE LONELINESS, I want to be on my own but I want to be held.

Oh yeah, another side effect is I find it really hard to follow a thought through to it’s conclusion. Distraction is a powerful thing.

I’ve been planning my suicide. One of the side effects of anti depressants can be suicidal thoughts. Isn’t that nuts? The thing that’s supposed to save you from that may actually cause it. Well, coming off them has made it seem that killing myself might actually be a sensible idea. Could quite possibly benefit the world. Again, insane drug mumblings. I’m pretty sure that’s what they are. So I’ve agreed with myself to not act on them for the next 6 weeks. Let’s wait and see how I feel when I’m more settled in coming off these pills and then we can talk about it. I’m pretty sure in 6 weeks those feelings will have passed. About 85% confident. If I wasn’t, I’d do it now.

And this is why I’m carrying on doing the show. My head is actually telling me to quit. Quit the one thing I used to think I was good at. I can’t afford to quit. Life is expensive for me right now and I can’t turn a fucking job down. But imagine. My head says I should just quit. Or at the very least take tonight off sick. But no. Keeping on air is keeping me alive. Partly cos I have to focus for 3 hours on something other than me and my best mate is there to give me a metaphorical slap and grab my string as I start to float away and gently pull me back down to earth.

Remember, this is my choice to come off these pills. Just for today. A day at a time. This too shall pass.

I’m OK. I’m not OK. I might be OK in the future. These anti depressants are powerful bastards. They saved my life and kept me alive when I wanted to die. They have got me through the most distressing times I have ever been through as a human being. I would not be here without those sweet pills. But I need to see if I can stand on my own. Maybe I can’t. What then? Ah well, back on em and we carry on. Carry on. That’s all we can do, isn’t it?

Don’t worry about me. This might seem like the ramblings of a nutjob. They probably are but I’m gonna be OK. Gonna look at the fly problem in the loft, see if I can work out the source then watch some Tim & Eric.

I don’t know who or what I am. I’m just starting to find out.