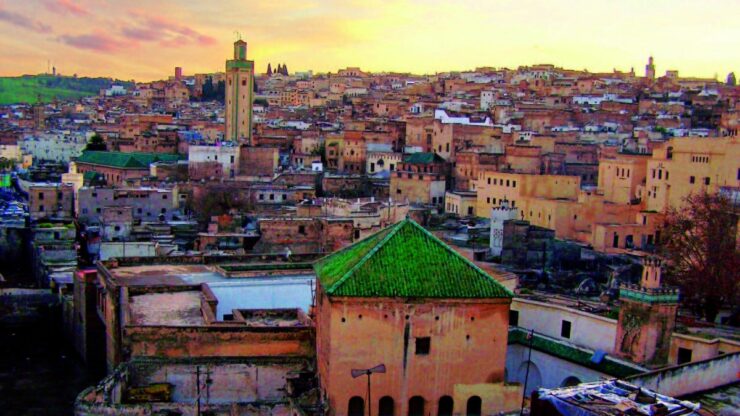 For some reason, I am in Marrakesh. I booked this trip last week on a whim. Life was getting to be way too heavy for me, so I did what addicts like to call a ‘geographical’ which basically means running away from all the stuff that was getting me down. The problem being that wherever I go, there I am.

The journey feels like it’s taken forever, but that’s because I started a long way away. I was in Scunthorpe this weekend taping my podcast The Rabbit Hole in front of a small but beautiful and highly appreciative audience. The venue, Cafe Indiependent, was absolutely stunning and we were made to feel very welcome. The small group that turned up looked very comfortable on the sofas and Laz-E-Boys that were used as seating. I messed up the technicals a bit and came away feeling a little annoyed with myself, but they were good shows.

So I was up bright and early to drive from Scarborough to Flitwick to drop Katherine home, and then on to Gatwick to come to Morocco. It really has been a long old day and I am absolutely shattered, but thrilled to have made it.

I very rarely go to places abroad on my own, which is odd because I really do prefer my own company. I annoy myself a lot and get flustered, but its better I experience these things with me and not someone else. Also, if I just want to sit around and do nothing, that’s cool. With someone else there I feel I have to be on all the time, and entertaining.

I wasn’t sure why I chose Marrakesh but I remembered a couple of weeks ago we pre-recorded a bit for the Apocalypse special that went out last week on my talkRADIO show The Late Night Alternative. Basically, we turned the phone in concert on its head and performed a little theatrical piece that was hinted at in hour 2 of the show and slowly took shape in the last hour. Anyway, in the pre-recorded bit (the first half hour was live, the second half hour was all taped in advance) I was reminded of the time I broadcast an LBC show from Marrakesh about 10 years ago. We had guests and the signal wasn’t great, in fact I think it dropped out a few times and the emergency tape may have even kicked in, but it was a pretty cool 3 hours of radio. What was even cooler about it was we weren’t even in Morocco. We hadn’t left our studio in Ladbroke Grove. The technical team just messed with the signal so it sounded very tinny and distant, I played a Moroccan market sound track and all of our guests, whilst being of Moroccan origin, also had establishments in Shepherds Bush. Hmm.

So this is probably why it was on my mind. I had initially wanted to go to North Korea but the trips are very expensive and there are only a few windows throughout the year you can go. Still, I’d love to do it one day.

After a brief stopover on Casablanca, I finally arrived in Marrakesh at 10.30pm. Here’s the funny thing, its in the same time zone as Britain. I don;t know why that amuses me so much, its not especially funny and I certainly wouldn’t open with it, but I don’t think I’ve ever been abroad and still been in the same time zone.

I’ve decided that while I’m here, I am going to do things I wouldn’t normally do. While I was waiting with the driver from the hotel, an American couple came and spoke to me. I answered briefly and they walked away. But no, I want to confront my fears and try and at least pretend to be a confident man, so I took a deep breath and went over and engaged them in conversation. This may not seem like a big thing to you, but to me it is HUGE. We chatted and they told me they were on their honeymoon and were musicians and cool stuff like that. When I ran out of things to say, I wanted to lift that awkward silence so I blurted out ‘Shame about Tom Petty dying, huh?’

Turns out they knew nothing about Tom’s passing and they were both quite upset by it.

Eventually we got to the hotel except it wasn’t a hotel, it was a hostel. This is cool because I kind of knew it was a hostel but didn’t want to admit that to myself. Look, the whole 6 nights including flights and hotel (sorry hostel) cost £490 so I wasn’t expecting much. the only other time I stayed in a hostel was in Japan in a Buddhist temple and it was easily the most uncomfortable 2 nights of my life. At least this time I had booked a room to myself and my own shower and toilet. Or so I thought…the hotel had obviously thought I was’t coming and rented my room out. Never mind, they knew somewhere nearby that would take me.

The room, which I am in now, is basic but OK. It’s a bed, well, 2 beds actually, and a shower and a toilet but I know it is going to get VERY noisy outside my room when all the heads and hippies come down in the morning. Ah well, 6 nights. Although part of me is thinking ‘fuck it, go to a nice hotel’.

I finally checked in around 12.30, dropped my stuff off and headed to the square. It was still bustling with life and plenty of market stalls were open. I bought a bottle of water and some juice for 10 times the price it said on the actual stall. Ah well, first night and all that. I then had a wander and was offered some pigs heads. I passed. Maybe tomorrow night.

After a meal of chicken tagine, I wandered back to the hostel where I was offered hash, grass and opium. I passed on all 3. A young beggar boy was pestering me for food in French. I politely declined and then ignored him. After a few minutes he said in perfect English ‘Oh fuck you you motherfucker’.

I am now in my ‘room’ wide awake. I’ve just looked at myself naked in the mirror and seen a fat old man looking back. The stuff I came here to avoid is still in my head. And now I’m wondering if I’ve made a terrible, terrible mistake coming here. I’ve left some of my meds at home, so I only have enough Mirtazapine for 4 nights. Not the end of the world, I can stretch them out a bit, but that’s making me anxious.

I Need To Get Good At Sex